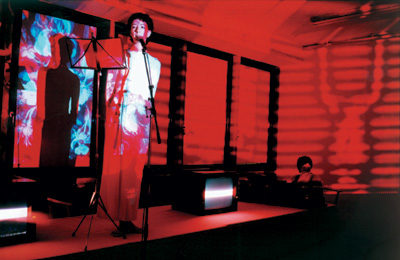 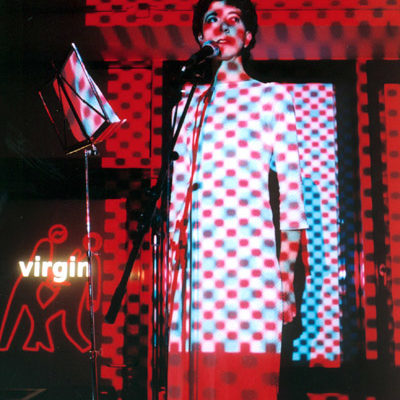 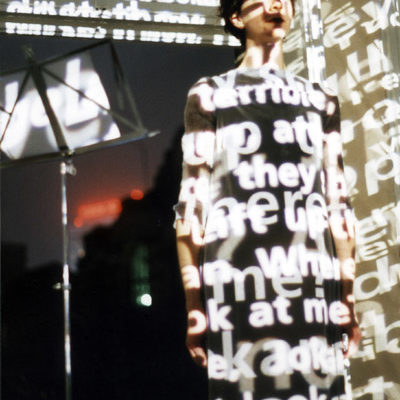 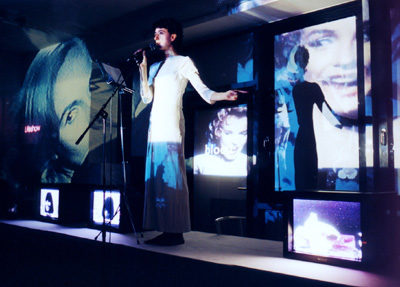 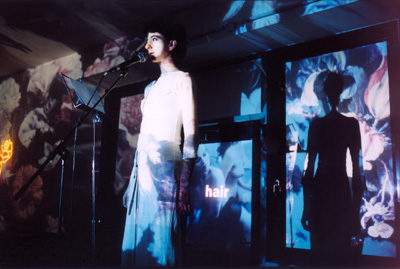 Slide and Video projections by Katrin Schoof and Rudie Ewals surround the audience in an ever- changing world of light, color and images – an emersion into centuries of the story of seduction and passion.

Lindy Annis speaks Wildes text in this multi-medial performance as if uninvolved. Salome sounds as if not Oscar Wilde, but Gertrude Stein had written the text, which has been distilled down to a repeating round of a handful of sentences.
„Certainly the most opulent of Lindy Annis’ works was her „Salomé“. This Production offered a wondrous immersion into a sultry world of images of slide and video projections, accompanied by the minimalist sounds by Frieder Butzmann. But even here, the theatricalised space was powerless against the performative presence of Lindy Annis, who placed Wilde’s text as a cool contrast.“

Lindy Annis deserves high praise for dusting off this play in a dense performance in Podewil. Slide and video projections immerse the audience in a space of hybrid beauty. It is as if one were placed directly within Wildes iridescent language, considering many of the projections consist of the play“s key phrases. In the middle of this luxurious loop, Annis speaks Wildes Text, as if she were unattched to the scene. The steamily intoxicating seduction of the images project themselves upon her exquisite beauty as on the window panes which are symbolically thrown opened, letting in the fresh winter air.

A long banquet table serves Lindy Annis as stage; between four monitors she stands there calmly at a microphone and cojures diverse and always penetrating levels of speech.

Rudie Ewals and Katrin Schoof have made penetrating images from the Salome iconography through the centuries, seduction scenes from films, pictograms and texts.

The Berlin composer Frieder Butzmann wrote a reserved sound track which playfully praises Salome’s beauty with children’s whistles, accompanies the dance of the seven veils with a drumming toy moor and collages sleezy bar music just as skilfully as nocturnal nature sounds, with which the piece fades away after three quarters of an hour… and thus succeeds, despite the diverse medias, a coherent and contemporary look at the legend. 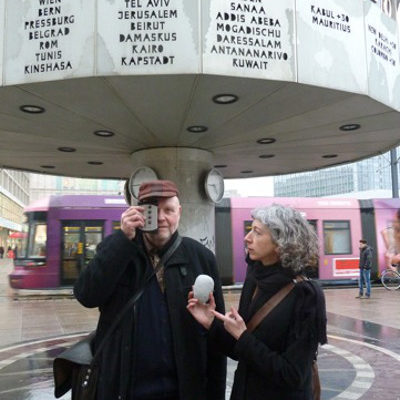 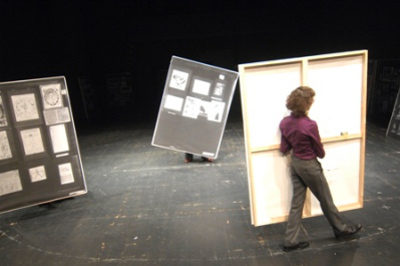